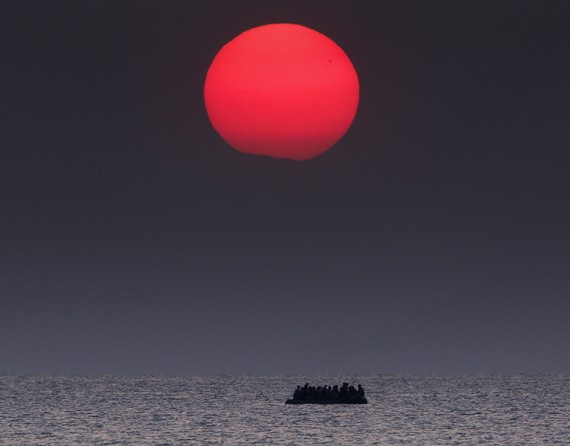 Associated Press || For an investigation of severe labor abuses tied to the supply of seafood to American supermarkets and restaurants, reporting that freed 2,000 slaves, brought perpetrators to justice and inspired reforms.

AP Investigation: Are slaves catching the fish you buy?

US lets in Thai fish caught by slaves despite law

Los Angeles Times Staff || For exceptional reporting, including both local and global perspectives, on the shooting in San Bernardino and the terror investigation that followed.

How the L.A. Times Covered the San Bernardino Terrorist Attack

Shooter Had Cache of Bullets and Bombs

A Christmas Party, a Game and Then Gunfire

An Outsider at Home and Abroad

Police Dispatches: ‘We Have an Active Shooter, We Need an Entry Team Now’

Leonora LaPeter Anton and Anthony Cormier of the Tampa Bay Times and Michael Braga of the Sarasota Herald-Tribune || For a stellar example of collaborative reporting by two news organizations that revealed escalating violence and neglect in Florida mental hospitals and laid the blame at the door of state officials.

Christian Miller of ProPublica and Ken Armstrong of The Marshall Project || For a startling examination and exposé of law enforcement’s enduring failures to investigate reports of rape properly and to comprehend the traumatic effects on its victims.

An Unbelievable Story of Rape

Transcript: How Not to Handle a Rape Investigation

How We Reported “An Unbelievable Story of Rape  (The reporting by ProPublica and The Marshall Project spanned several months and involved numerous interviews, a review of previously undisclosed law enforcement records and exchanges with experts on investigating rape.)

Michael LaForgia, Cara Fitzpatrick and Lisa Gartner of Tampa Bay Times || For exposing a local school board’s culpability in turning some county schools into failure factories, with tragic consequences for the community. (Moved by the Board from the Public Service category, where it was also entered.)

For 31 kids, this is what it is like to go to resegregated schools

Trying to get out

The Washington Post Staff || For its revelatory initiative in creating and using a national database to illustrate how often and why the police shoot to kill and who the victims are most likely to be.

Deadly consequences while on duty and under fire

A Mob Killing and Flawed Justice

Video: The Killing of Farkhunda

A Thin Line of Defense Against ‘Honor Killings’

Fear of Taliban Drives Women Out of Kunduz

Kathryn Schulz of The New Yorker || For an elegant scientific narrative of the rupturing of the Cascadia fault line, a masterwork of environmental reporting and writing.

The Really Big One

Farah Stockman of The Boston Globe || For extensively reported columns that probe the legacy of busing in Boston and its effect on education in the city with a clear eye on ongoing racial contradictions.

Naming our era of racial contradictions

Did busing slow the city’s desegregation?

Boston schools get a do-over

In schools, can separate be equal?

How the busing crisis changed police, for the better

How a standoff over schools changed the country

Donald Trump, Black Lives Matter, and the echoes of busing

Emily Nussbaum of The New Yorker || For television reviews written with an affection that never blunts the shrewdness of her analysis or the easy authority of her writing.

The Price is Right

John Hackworth of Sun Newspapers, Charlotte Harbor, FL || For fierce, indignant editorials that demanded truth and change after the deadly assault of an inmate by corrections officers.

Time is past for resolution in prison case

What went wrong with state prisons?

Another day, another dead inmate at CCI

Grand juries should bow out of police cases

Jack Ohman of The Sacramento Bee || For cartoons that convey wry, rueful perspectives through sophisticated style that combines bold line work with subtle colors and textures.

Mauricio Lima, Sergey Ponomarev, Tyler Hicks and Daniel Etter of The New York Times || For photographs that captured the resolve of refugees, the perils of their journeys and the struggle of host countries to take them in.

Photography Staff of Thomson Reuters || For gripping photographs, each with its own voice, that follow migrant refugees hundreds of miles across uncertain boundaries to unknown destinations.

Jessica Rinaldi of The Boston Globe || For the raw and revealing photographic story of a boy who strives to find his footing after abuse by those he trusted.

The Sympathizer, by Viet Thanh Nguyen (Grove Press) || A layered immigrant tale told in the wry, confessional voice of a “man of two minds” — and two countries, Vietnam and the United States.

Hamilton, by Lin-Manuel Miranda || A landmark American musical about the gifted and self-destructive founding father whose story becomes both contemporary and irresistible.

Custer’s Trials: A Life on the Frontier of a New America, by T.J. Stiles (Alfred A. Knopf) || A rich and surprising new telling of the journey of the iconic American soldier whose death turns out not to have been the main point of his life. (Moved by the Board from the Biography category.)

Barbarian Days: A Surfing Life, by William Finnegan (Penguin Press) || A finely crafted memoir of a youthful obsession that has propelled the author through a distinguished writing career.

Ozone Journal, by Peter Balakian (University of Chicago Press) || Poems that bear witness to the old losses and tragedies that undergird a global age of danger and uncertainty.

Black Flags: The Rise of ISIS, by Joby Warrick (Doubleday) || A deeply reported book of remarkable clarity showing how the flawed rationale for the Iraq War led to the explosive growth of the Islamic State.

In for a Penny, In for a Pound, by Henry Threadgill (Pi Recordings) || Recording released on May 26, 2015 by Zooid, a highly original work in which notated music and improvisation mesh in a sonic tapestry that seems the very expression of modern American life (Pi Recordings).

This website uses cookies to improve your experience while you navigate through the website. Out of these, the cookies that are categorized as necessary are stored on your browser as they are essential for the working of basic functionalities of the website. We also use third-party cookies that help us analyze and understand how you use this website. These cookies will be stored in your browser only with your consent. You also have the option to opt-out of these cookies. But opting out of some of these cookies may affect your browsing experience.
Necessary Always Enabled
Necessary cookies are absolutely essential for the website to function properly. This category only includes cookies that ensures basic functionalities and security features of the website. These cookies do not store any personal information.
Non-necessary
Any cookies that may not be particularly necessary for the website to function and is used specifically to collect user personal data via analytics, ads, other embedded contents are termed as non-necessary cookies. It is mandatory to procure user consent prior to running these cookies on your website.
SAVE & ACCEPT